Life in Christ Church is a teaching ministry and believes "The Bible is GOD Speaking to ​YOU", and we want to give everyone an opportunity to hear what GOD has to say.
​

​Originally from Kentucky, Mark has lived in Sierra Vista since September 1985.  He spent 3 years in the U.S. Army which brought him to the area.  Mark was “born again” and “Spirit filled” during the Catholic Charismatic Movement of the late 1970s.  He began ministering the WORD of God in local churches and prisons in 1986. In 1994 he was ordained as a minister of the Gospel under his father’s ministry, Life in Christ Ministries, Inc.  Mark obeyed God’s call and founded LICC in Sierra Vista September 22, 1996.  He and his wife Teresa were married in 1998.  He has three wonderful children, Elizabeth (Louisville, KY), Anna and Jordan (Sierra Vista), two grandsons, Cooper, and Jackson (Louisville, KY).  Come join him as he teaches the Word of God. 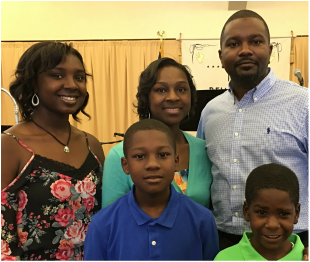 ​Originally from Georgia, Elder Bryant has lived in Sierra Vista since August 2003.  Bryant spent 6 years in the U.S. Army which brought he and his family to the area.  He was 'born again' while stationed in Germany and became 'Spirit filled' at Life In Christ Church in Sierra Vista, Arizona in 2003. Bryant was ordained into ministry by Pastor Mark Browning in March 2008. While serving under the ministerial mentorship of Pastor Browning, he was appointed Head Elder of LICC. Bryant and his wife Leslie were married in 2002, and they have three beautiful children, Jaslyn, Jamin & Jeremy.
Proudly powered by Weebly